Posted on November 1, 2011 by giratravel

It was lunch time and we were promised something really special. Truth be told, pretty much everything in Italy is special, and so far on our trip we had not been disappointed with any of the venues we had visited for the mid-day pranzo.

You might say the bar was set pretty high, but even a ‘typical’ Italian lunch would be great, considering the standard any food establish would have to meet. I would have been happy with the usual, but as it turns out, this was some quite different and refreshing. 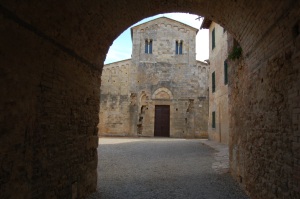 Abbadia Isola is a mysterious oasis in the midst of the Chianti countryside, within sight of the medieval perched town of Monteriggioni, which beckons from a distance. We’ve passed through it many times before, and from the gas station across from the village parking lot, you might not sense the magic that waits behind the village portal. 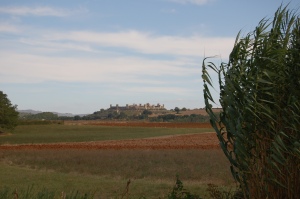 In the the 11th century, this area was covered with marshlands, which were worked by Benedictine monks who fashioned an area where a monastery and important church could be built. Hence the name, which means ‘abbey island’. The church was consecrated in 1173 and it is still recognized as a masterpiece of Romanesque art.

Located on the Via Francigena, Abbadia Isola occupied an important position in medieval times, as it was right on the border line of the territory of Florence and the territory of Siena. In the 14th century, with the rise of Monteriggioni as a regional center, the village began to decline in importance, although it now is a center for active restoration.

Our destination for today is the Futura Osteria, which has an interesting enough name. It’s an establishment that takes its own creative approach to cuisine, carefully and deliberately bending all the rules to present food that not only takes different, but looks different. Its presentations are at once enticing and humorous, which includes the home made breads, served in a paper bag. As our server explained “we are young, so we can do whatever we want!”

We didn’t get a chance to dine at Capitan Uncino, which was a pity because it has a nice scenic terrace in the back looking out toward Monteriggioni.

If you find yourself cruising the Chianti countryside at lunch time, or any other time for that matter, Abbadia Isola is a highly recommended stop.

For a holiday stay in this area, please consider:

Villa di Riciano – Sleeps 6 and has a wonderful view of Monteriggioni.

Villa di Marciano – Sleeps up to 15 in a great hilltop spot on the way to Castellina in Chianti.

Contact us to find a cozy Italian vacation rental.
View all posts by giratravel →
This entry was posted in Italy up close, Tuscany and tagged abbadia isola, benedictine monks, chianti villas for rent, monteriggioni, Tuscany. Bookmark the permalink.